Asha Kumar is a NC chess player in the tenth grade. This year she won the NC Girls Scholastic Chess Championships making her NC’s invitee to the National Haring Invitational.
Asha performed well finishing tied for 2nd. She tied for first in the 2022 All Girls National Championship (U16). NC Chess interviewed Asha and her parents for this month’s newsletter.

The United States Open is the biggest open annual chess event organized by US Chess. The most important aspect of this tournament is that the highest American finisher get an automatic bid to the 12-person Invitational USA Chess Championship the following year. North Carolina had two strong contenders to win this bid: GM Elshan Moradiabadi and GM Daniel Naroditsky. In a very exciting down-to-the-wire finish, GM Moradiabadi won the automatic bid by defeating GM Illia Nyzhnyk with black in the final round. GM Nyzhnyk was the highest-rated player in the tournament (US Chess rating: 2773). Moradiabadi scored 8.0/9.0 to finish in a two-way tie for first. The person he tied is not an American player, so Moradiabadi gained the automatic bid by default.
Ten North Carolina players made the long trip to Rancho Mirage, California to play this event. Unlike most large open chess events, the US Open only uses one pairing group, so in the 1st round, the differences in rating between opponents are often 700-900 points. Here are the final results for those 10 (out of 403 total entrants):

The United States Open Chess Tournament is supplemented by a host of special event tournaments where representation is by individual State Champions. The oldest of these supplemental tournaments is the Denker, which brings together the 50 state high school champions (K-12). More recent creations: the Barber (K-8), the Rockefeller (K-5), the Haring (K-12 girls), and the Irwin (Senior: 50+ years of age). These tournaments concluded on August 2nd and North Carolina was well-represented in each one.
Here are the results for our NC players:

These are outstanding results for North Carolina! In a six-round tournament, every NC representative scored at least 3.0 (no negative scores). Asha Kumar came within a whisker of winning her tournament! If you see any of these players at your next couple of tournaments, take a minute to congratulate them on their performances.
The North Carolina Chess Association is responsible for determining these representatives through Championship events each year. The Association also provides financial support to ensure that the State is represented because going to the United States Open venue is often an expensive endeavor. This year the tournaments were being held at a resort in Rancho Mirage, California (near Palm Springs). Your annual dues help send our representatives to these events. North Carolina is in the forefront of state organizations in assisting our representatives to attend.
I could not be more pleased at how well North Carolina is represented by its chess players on the national level. There are a number of people who are working diligently to raise the level of chess in North Carolina and the results are quite evident. Please support your local chess clubs and do your best to attend the major events within the State. The progress we have made is astounding.

The summer is heating up and with it – norm chasing is heating up at the Charlotte Chess Center and Scholastic Academy as players compete in the Summer IM/GM Norm Invitational. With 40 players looking to gain titles and fight in some exciting games, this tournament is one of the most exciting of the summer in the NC chess scene. I hope to feature some quick lessons from these games so that you can take something away from it!

The tournament features some very prominent names in the chess world who I am sure readers will recognize:

Let’s start off with newly minted IM Tianqi Wang’s battle against FM Doug Eckert. The game featured a Ruy Lopez but with an early exchange on c6 (full game at this link: https://lichess.org/study/2PQRXg4P/9DqjMI36).

After 5. …Qf6, how did IM Tianqi Wang open the center and fight for the initiative?

After 10. …Be6, the natural developing move Nc3 is an obvious candidate move, but what did IM Tianqi Wang do to continue his slight initiative?

In this position, after 16. …Bg7, White has a slight edge, how did IM Tianqi Wang re-route his Knight to take advantage of potential outposts?

After the move 28. …Rd8? how did IM Tianqi Wang convert into a winning endgame with a powerful Knight on an outpost?

One move 49, Black played …Nf6, how can White mate in three from this position?

Elo Rating System
The Myth of Playing Up by Charles Roberson

This month I will discuss the Elo rating system, some history, the fundamentals of how it works and the myth of playing up.

Arpad Elo invented the system which was adopted by the USCF in 1960 and it was adopted by FIDE 10 years later in 1970. He used real tournament data from the USCF to develop his system. This would have been quite the effort considering that the hand held calculator hadn’t been invented and he was possibly limited to pencil, paper and a slide rule. It is still in use by the USCF and has been modified on several occasions. One includes a big change in 2015 which deals with the rapid rating increase of new people relative to established players which caused established players to lose lots of points thus deflating the upper middle group of the players.

The system expects you to perform exactly to your rating. It expects people rated higher than you to perform higher than you and the opposite for people rated lower. If you play a group of people with an average rating equal to yours the system expects you to turn in a 50% performance. If you play 5 opponents with an average rating of 1500 and you are rated 1500 the system expects you to score 2.5 out of 5. If you score 3 or more out of 5 tournament points then your rating will go up. Score 2 or less points out of 5 and your rating drops. The further away from expectation you perform, the more your rating will change. Also, your rating will change more in bigger tournaments than smaller ones. The base system will give you more points for performing above expectation in a 5 game tournament than in a 3 gamer. On top of that, there are bonus points for tournaments with 3 or more games and and more bonus points for the same level of performance for even bigger tournaments.

Now for the myth of playing up. Many think that if you want to raise your rating as fast as possible you should play up a section and the rating system will boost you more. This is not true. If you perform 200 points above your rating, then your rating will go up a given amount no matter how you did it. Let’s say you are rated 1600. There are lots of ways to perform at the 1800 level. Just to identify a few:

If you have used the USCF ratings estimator to get a quick estimate of your post tournament rating change ( at USCF rating estimator ), you’ll see that it doesn’t ask how you performed against each opponent; it asks each opponent’s rating and how many total tournament points you scored. So, it wants to know your average opponent, how many games and your overall score. It doesn’t care which opponent you won, drew or lost to. Lets look at some real numbers.

The above table came from entering data into the USCF rating estimator and we see multiple perfect scenarios for 2, 3, 4 and 5 game tournaments. I say perfect scenarios because I am assuming that you’ll play against exactly the correct opponent’s to achieve the intended rating gap, but more on this later. Before we get into the potential of playing up, lets observe a general trend that holds true: you get more points for performing at a given level by playing in tournaments that have more rounds if you play all the rounds. Notice, that a 1600 player performing at 1800 and playing an average field of 1400 gains 20 points in a 2 game tournament vs 52 points in a 5 game tournament against the same strength opponents.

So, there is nothing magical about playing up or any real advantage in the math: you have to perform well. The issue is that when you play higher rated players, you might not perform so well and thus lose rating points. In such cases, playing up is self defeating. Also, the probability of you scoring against each opponent is reduced, thus decreasing your odds of gaining rating points. To make things worse, you are making the tournament worse for those that have to play you: in effect, they are playing down when playing you. If you play too far up, you can hurt the integrity of the tournament. In such cases, everybody that plays effectively has a bye. If enough people play up, the tournament integrity can be sufficiently damaged.

On July 23, I ran a tournament in Burlington. There were two kids in the middle section that wanted to play up. I moved one of them up. The kid that didn’t play up won all of his games while the kid that played up score 1.5 of 3. The kid that didn’t play up gained 25 rating points and the other gained 11. So, the “magic” of playing up didn’t help. You might say that it gives you more experience playing stronger players which will help you learn faster. Well, what about the stronger player that had to play you the weaker player? Wasn’t that a diminished experience for him? Think of it this way: for each person playing up in a 5 game tournament, there are 5 people that have to play down for one of their games. This suggests there are more negatives than positives.

Here are two of the tournament pairing rules that can cause these events. The first is the lowest rated player with the worst score in each round gets the bye. If you play up, you could be the lowest rated player. The second is that you pair people together that have the same score or nearly the same score in each round. After a few rounds, you may be paired with others that played up. So, there is zero guarantee that playing up will go the way you want nor is there any guarantee that you’ll get to play multiple much higher rated opponents.

For these reasons, there will be a new rule in the chess tournaments that I run: no playing up. You will be in the section that your rating puts you in. 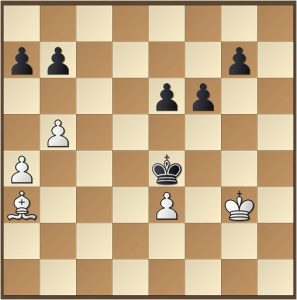 White to move and win: 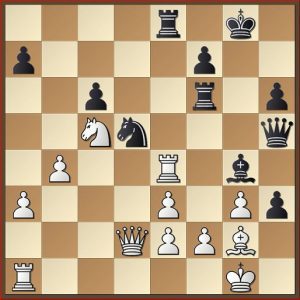 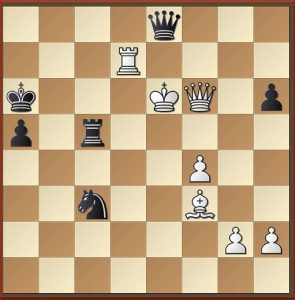 White to move and win: Kd6 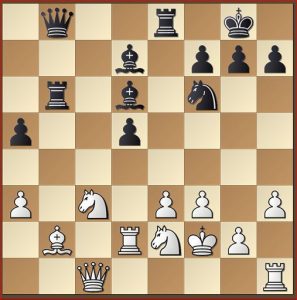 Black to move and win: Rxe3!