In this issue, you will find:

Gordan Ray – Jim, The Man, The Myth, and the Legend
Patrick McCartney  – My First Experience at the US Masters – Part I
Wayne Christensen and John Timmel  – Games from the 2022 NC Senior Championship
John Timmel – To Move and Win!

Jim, The Man, The Myth, and the Legend – in memory of Jim Watson
by Gordan Ray

Last month Charles Robinson asked me to submit a poem in memory of Jim Watson and also to submit an article about him this month.  As many of you know Jim was not only a physically imposing person, but in many ways, he was also a Larger than Life Figure.  So it is my honor to try to tell you about “Jim, The Man, The Myth, and the Legend”.

I met Jim in 2009 at Via Cappuccino in Rocky Mount.  He was a Big Guy with a Big Heart, and I quickly found out that people simply called him “Mr. Big Jim”.  Over the last 13 years Big Jim was my chess mentor and friend.  I learned many things from Jim about chess strategy, but I also learned how to think about the “Extra Things” that are associated with the game.  Here are just a few:

Lastly, I want to share with you why Jim Watson played the Grob.  Almost everyone that knew Jim knew that he played the Grob.  Now you have to ask yourself why a Master would play such an offbeat opening.  He told me that he was a Master by the time he was 27 years old and that he and his wife were beginning to raise their family.  He said that his love for family was much more important than his love for chess, so he decided he did not have enough time to memorize traditional openings and games out to 20 plus moves.  He had already done that for years.  So, he decided he would create an asymmetrical board by playing the Grob, and he thought he could then simply “out-chess” most people because everyone would be out of book.

I decided to play the Grob in his memory in Henderson shortly after his passing.  I played white twice and got a win and a draw.  Both games yielded “Jim-like” positions where I was able to use another one of Jim’s ideas called Quadrant Theory.  I actually won the tournament with 2.5 points out of 3.  Also, Henry Hopson recently got a win, in a Wilson Tournament, where he played the Grob in Jim’s memory.  He even told me that he convinced Benjamin Snodgrass to play it once.  Ben got a crushing win with it as well.  So maybe Jim was onto something there.  Create an asymmetrical board and “out-chess” your opponent.  RIP Big Jim.  You were one of a kind.

The US Masters is a restricted tournament
where either your USCF or FIDE rating must either be 2200 or over or once was 2200 or over. My USCF rating was never higher than 2185,
but because only select events in the United States are FIDE rated, and because I happened to have excellent results in my first couple of FIDE-rated events, such as the 2002 US Open, I happened to be over 2200 from 2004 to 2006, and therefore I decided to give the US Masters a stab. It was definitely a different experience than playing the A-players and experts that I face all the time at the club. Even when you think you have a game won or drawn, think again! I thought I had a drawn ending in the second round just to have my pawns become shattered and another loss occurs. In fact, I lost the first three games before my results basically took a complete 180. After losing the first three games, I won the fourth round, which is the game I will be analyzing here. That was followed by two draws in rounds five and six before winning my seventh round, which will be the game analyzed in Part II next month. However, an observation that I made during this tournament is that there was a lot of coughing going on in the room. My first-round opponent was coughing, along with a few others in the first round on Wednesday night.
Things got a little worse on Thursday, and then even worse than that on Friday, and Friday night, I start coughing. Saturday was even worse than Friday throughout the room, and on Saturday night, I come down with flu symptoms and was unable to play the final two rounds on Sunday. So in a tournament where I started out as the 186th seed out of 202 players, I figured I’d be fortunate to score 2 1/2 or 3 points out of a possible 9. I wind up scoring 3 points out of only 7 rounds and will gain about 25 to 30 points on my FIDE rating as a result of it. This fourth-round game that will be analyzed here will see White playing an offbeat flank opening, Sokolsky’s Opening (a.k.a. The Polish Attack
or The Orangutan), but after getting Black’s e-pawn for his b-pawn, White relinquishes his dark-squared bishop for a knight, and takes over the central dark squares by placing all of his pawns on dark squares. Then it becomes a matter of finding the right time to break in the center with the move e4, and after a few tactics, White winds up with a dangerous passed pawn that White uses to transition to a winning king and pawn endgame. Without further ado, let’s take a look at the game.

1. b4 e5 2. Bb2 Bxb4 3. Bxe5 Nf6 4. c3
This is a more modern interpretation of the opening than the older, and
probably more common, 4.c4 or 4.Nf3
White’s idea is simple. Trade the bishop
for the knight on f6 and park the pawns on the dark squares, blunting Black’s
unopposed bishop.

Be7 5. g3
There is no need to take the knight yet as
moving the knight would either drop the g-pawn, or else Black would have to
place the knight on h5, which with the move g3 played by White, is not a
productive move for Black. There is an alternative here, 5.e3, which was
played by Carlsen himself against Nakamura in 2021. Black has a number of
options here, like 5…c5 (what Nakamura played), 5…O-O, 5…Nc6, or 5…d5.
After something like 5…d5, White can play 6.Bxf6 Bxf6 7.d4 O-O 8.Bd3 c5 9.Ne2 g6 10.O-O Nc6
the position is roughly equal. The Sokolsky does not typically lead to an
advantage for White, but a playable position with rough equality can
easily be achieved, and the game is often decided in the middlegame or endgame.

5….Nc6
This puts the immediate question on the bishop.
That said, even after a move like 5…d5 or 5…O-O, White’s response would be
the same. After 5…O-O, Black threatens to play 6…Ng4 as g7 is protected,
and the Bishop has nowhere good to go. After 5…d5, White needs to also take
the knight immediately so as to force Black to recapture with the bishop,
which is White’s intent all along, following up with plugging up the dark
squares with pawns. Delaying the capture would allow 6…Nbd7, and recapturing
on f6 with the knight, which would benefit Black.

6. Bxf6 Bxf6 7. e3
Before fianchettoing the bishop, White sets up the d4-push, which he will play either
the moment that Black plays …d5, or if Black doesn’t ever push the d-pawn
that far, then at some point when White has nothing more convenient to play.

10….Bf5
I don’t like this move for Black at all as it allows White to develop the queen with tempo.

12. Ne2 Qd7 13. Nf4 c6
This move does threaten to trap the White
queen with a subsequent …Bg4, but it would be better to develop his last
piece via 13…Rad8. The game move just forces White to play a move he
probably wants to play anyway as it leads to a favorable trade, gaining near
complete control of the light squares. 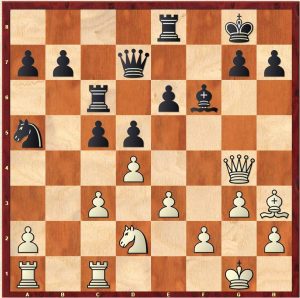 I don’t like this move for Black as it gives White tactical reasons to break
at this point in the center.

19. e4! cxd4 20. exd5
And the fact that the pawn now attacks the rook makes the in-between move
…dxc3 impossible for Black.
No matter what Black does here, White is better. He cannot recapture on d5
with the pawn. Recapturing via 20…Qxd5 allows 21.Ne4 or 21.Bg2, both of
which are better for White, and the game move isn’t any better. This is why I
don’t like Black’s 18th move.

Rxc3 21. Ne4
With the major threat of 22.Nxf6+, winning the queen, combined
with the e6-pawn still being a dead duck. 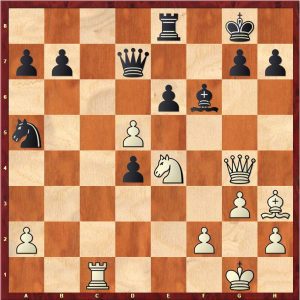 31. Bxc6 bxc6 32. Qxc6 d3
White is completely winning, and while computers might prefer 33.Qxa6 here,
I decided to take the simpler route to victory.

33. Qd7
The important factors to keep in mind here are that Black cannot trade queens
as White’s d-pawn would promote before Black’s, and that the Queen cannot move away.

Kf8
This move is virtually forced as Black cannot move the queen due to Qf7+ and e7, winning easily.

34. Kf1
This forces a winning pawn ending. White’s idea is simple. If Black trades queens,
both the passed pawns drop and White wins the 4-on-3 pawn ending. If Black
doesn’t trade queens, White will force the issue.

This tournament was definitely a learning experience.
While I don’t advocate playing up in every tournament you play, every once in
a while, playing against stronger opposition can be a definite learning
experience. Next month, I’ll analyze my Round 7 victory. Until then, this is a
great time to play in tournaments. Who wants to be outside in the brutal cold anyway? 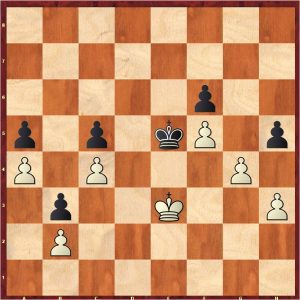 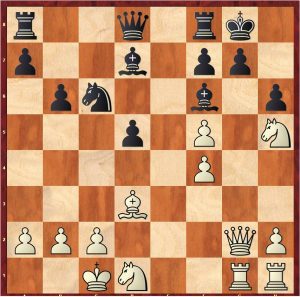 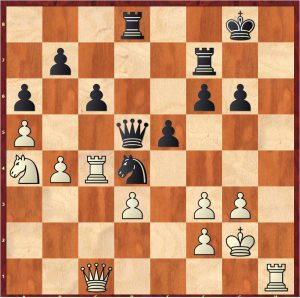 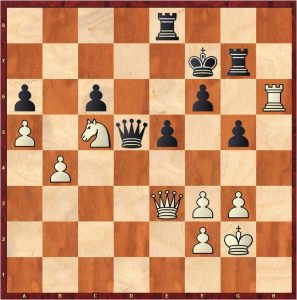 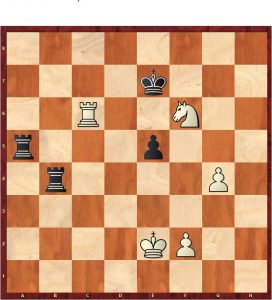 To Move and Win! – John Timmel

games from the 2022 NC Senior Championship

Black to move and win 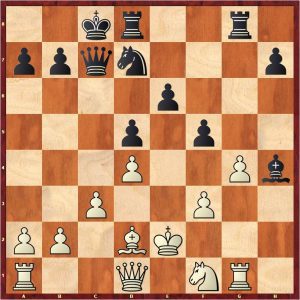 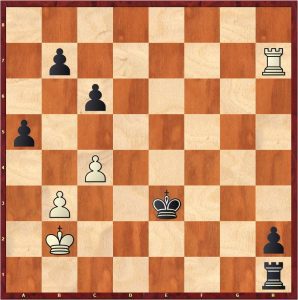 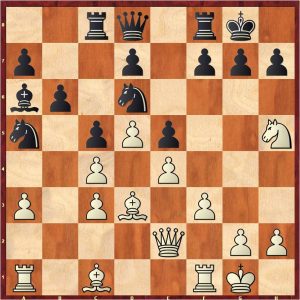 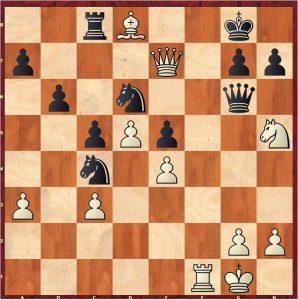