In this issue, you will find:
Charles – Charity GM Simul for Red Cross Ukraine relief
and Report on 2022 NC Girls State Chess Championships
John – Simul Games and this month’s “To Move and Win”
B. Rosson Davis – WHAT IS THIS MESMERIZING GAME 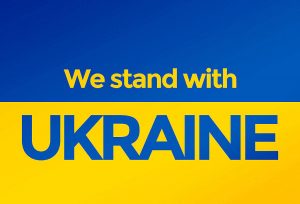 On Saturday June 4, the 2022 NC Girls State Chess Championships was held in Burlington, NC at the Country Inn and Suites. The tournament was organized and TD’d by Charles Roberson with assistance from John Timmel and Wayne Spon. It was a one day event with a time control of G/45 d5. There were two sections: Open and U1300. The U1300 section had a U700 class.

Everyone had a good time and to Charles’ surprise all the parents were very well behaved. 😀 As is usual, none of the U1300 games came close to consuming the entire time control and many of the U700 games finished in under 15 minutes. On the other hand, the Open section games consumed much more time including some that came down to less than 1 minute for each side.
If you want to know how to get a rating above 1000, you take a pointer from the higher rated girls: take your time and look at all your choices – don’t just make the first entertaining move you see.

The open section ended with Asha Kumar undefeated in a clear first place, but this wasn’t guaranteed. In the last game, Asha was winning vs Emilyn Doan then she suffered from an over confident blunder. This led to an exciting endgame where both girls were in severe time trouble with Asha winning the endgame. There was a tie for second between Bonnie He and Emilyn Doan; both with 2 points. The tie was broken by a two game blitz match at G/10. Bonnie won the first game and the second game was drawn so Bonnie claimed the second place trophy.

Asha Kumar received the first place trophy and a $200 scholarship from the Country Inn and Suites by Radisson which was presented by sales manager Katie Dukeshire-Geoffrion. Asha will be NC’s representative at the Haring National Tournament of Girls State Champions in California in July. She will receive an $800 stipend to assist with travel expenses from the NCCA.

The U1300 section ended with a clear victor and a clear second place. Thia Doan took first place with an undefeated score of 4.0 (4 wins) and Pradeeksha Bhaskar took second with 3 points with her only loss being to Thia. The U700 class wasn’t as clean. There was a 4 way tie for 1st place and only two trophies. Sri Gundala, Tanvi Tubati, Max Kirschbaum and Mia Rajan tied for first with 2 points. For some reason Max left early so the three remaining girls had a blitz (G10) round robin play off with Tanvi winning and Sri finishing in a clear second.

The NCCA wishes all of the competitors good luck with their future in chess. 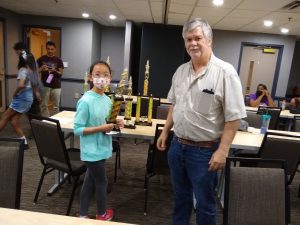 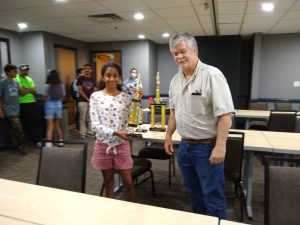 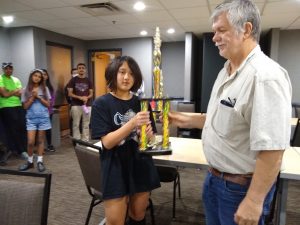 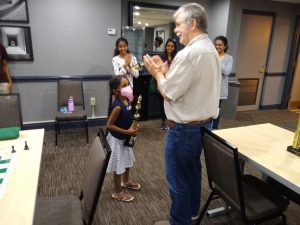 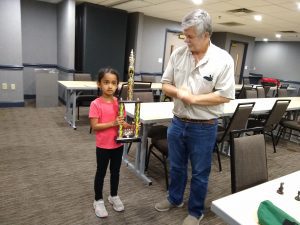 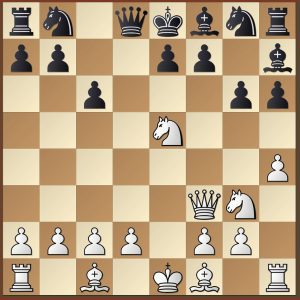 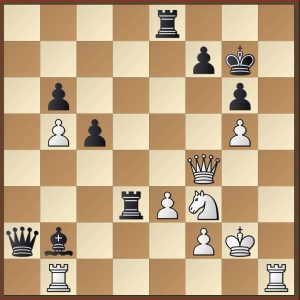 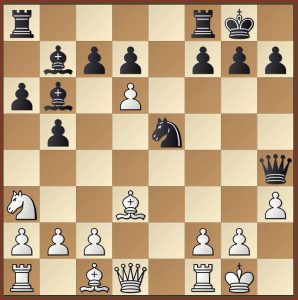 The sword, the mind is swift. The greatest warrior is he who conquers himself.

eschews the tyranny of chance. Against all odds, and with its unforgiving rules, the game

of Chess has lasted centuries. Chess brings victory to the intellect. Not just a simple game,

Chess is also a science, an art, an intellectual endeavor. Life is a kind of chess— “in which

we have points to gain, and competitors or adversaries to contend with, and in which

there is a vast variety of good and ill events (moves), that are in some degree, the effects of

prudence or want of it.” This insight from Ben Franklin’s essay, The Morals of Chess.

This is the game that hovers between heaven and earth, played by great men and

unknown strangers. This game is a unique lassoing of opposites, ancient, yet eternally

new. Chess is an activity of the imagination, limited to a fixed geometric area, 64 squares,

but unlimited in its permutations, constantly evolving over centuries. Perhaps … it is a

mathematics calculating nothing? An Art form without artwork? Architecture without

substance? Yet … more durable in its essence, and myriad of forms, its patterns of

possibilities, than all the books, theorems, laws, and constellations, the only game

played by people of all races, ages, status, gender, religions, royalty, celebrities, and

common folk throughout human history. What is the purpose of Chess? To sharpen the

mind? To deaden boredom? To fortify the spirit? To “play at war“ on a bloodless

Caution, and Perseverance. (I suggest Chess be taught in schools, starting in 3rd grade!)

It takes a certain type of individual, of either sex, special geniuses with apparent

gifts of imagination, patience and skill. One wonders if there is a special convolution in

their gray matter, a kind of “chess muscle”– that produces its own chess wizards who

have an affinity and an aptitude for this unique ingenious game. Does a player get

fulfillment from the mere to-and-fro, forward-and-back of thirty-two pieces? From the

power of a mere pawn, or, a Queen sacrificed. Or, consider that some players spend

If we are watching a match, a close match, between evenly-skilled, well-matched

players, can we, as observers, discern the player who plays for the pure delight of playing,

when we cannot discern the intentions of either player, or make out who has the

advantage? We are such novices, having no idea about the possibilities, or outcome of this

To play the game, in all its nuances, the game of Chess, like love, surrenders to an

unknown attraction, and must be played with a partner, in this case, an opponent... and,

in some cases, they are no longer opponents testing their abilities in a spirit of play, but

enemies resolved to annihilate each other… with the exquisite power in a single move!

Sometimes, the “self” plays itself, a solitary player playing Black and White– sort of

an artificial schizophrenia, or divided consciousness. And, then there is, for some players,

the desire for vengeance, fanatically channeled into their game. These players work them-

selves into a state of almost manic excitement, despite their calm demeanor and attuned

thinking, at the beginning and throughout their game. For some, how many games are

played with obvious insatiability, or, played against themselves, whether in confinement,

incarceration, or by circumstance. And, consider how the pleasure in playing becomes a

which permeates all their waking hours, even their sleep. This unquenchable thirst for

Chess is like a fever of constatnt thinking and playing.

Call this a pathological form of mental overstimulation– “chess sickness” —

a monsterous monomaniacal obsession with the game. It attacks the body as well as the

mind. Anyone who has suffered this mania is at risk of madness, with relapses of “chess

sickness” possible at any given moment, a fevered chess game becomes a delirium of

play, a kind of “dream chess” you cannot shake, with all the synptoms of abnormal

excitation becoming appalingly apparent as one has less and less self-control. In certain

situations, in this quiet madness, the chess-addict seems almost ready to explode, resign,

surrendering their minds to Chess, stretching the imagination with the game’s infinite

possibilities. This immortal game excites the brain, challenges the intellect with the

dynamic struggle of mind against mind, and, with all the game’s unpredictable outcomes.

Chess enhances one’s spirit and stamina, creates a love for this intellectual endeavor.

Chess is forever elegant, a game of perfect information, as all the variables are always

known to all players. Nothing is hidden. Yet, those who play chess glean insights into an

player’s personality revealed. Chess—a war played out with outside world cut off.

games will, perhaps, reveal the ultimate power-play in a single move. The brain obsessed,

Chess captivates with its mesmerizing power transformaing the human brain.